skip to main | skip to sidebar

Quite some time since the last posting.  Some time have been used to boat related activities, but not so much building.  I popped the first joined rudder out of the moulds the other evening though.  But I'll try to summarize in more or less chronological order.

Just a couple of days after the last posting I made a useless carbon bowpole and destroyed the rudder moulds.  These events helped stall the progress a bit.  The bow pole was laid up on a PVC tube which worked like a charm, but I was not able to shrink the shrinking tube I had bought for the purpose of making a very nice finish, which led to me not being able to pull the layers tight, which resulted in ~800g of expensive carbon/epoxy garbage.

The mould de-laminated due to the spray glue I used to position the skins after first releasing them from the moulds (which was really easy) to prevent mould damage.  The reason I was to release the rudder halves again was that they were routed down to the centre line and ready to join, but the router had touched the edge of the mould a couple of places and I wanted to re wax the moulds before joining the half. 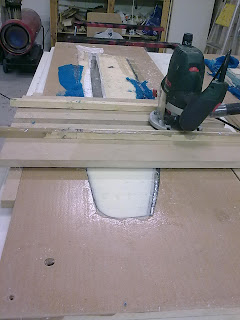 Routing the foam down to rudder centreline
To make sure the rudder parts themselves would not get waxed, I decided to remove the parts.  That is when this happened.  I took some pictures, but they seem to have vanished during the setting up of a new server and network at home/my wife's company, which has also contributed to rather slow progress lately.  Anyway, I cut up the loose areas of the mould surface with a utility knife, poured in some epoxy and put it all under vacuum.  Then I left for Oslo to meet friends and shop for the mast.

I had the pleasure of meeting two Norwegian multihull "veterans", designer/builders/sailors of the formula 28 trimarans "XOZ" and "Mirage".  We had great conversations on design and details on building the mast and I picked up parts for the mould and other useful stuff along with a new old rudder for my Telstar "Frimann".  I bought foam for the mast (Divinycell H100 8mm) and had discussions on what kind of carbon fibre to use with several experts.  I have now settled on a high strength fibre like the T700, still one quote to get before final decision.  A high modulus fibre, which I first planned on using, would probably not make much difference but to make the mast more brittle and 5 times as expensive, given the way this wing mast is designed.

When back from Oslo I unpacked the moulds, sanded them slightly and decided they will never be the same again.  Might be possible to use though, but the finish will not be perfect, which was the idea with making moulds in the first place.  Well, here they are, waxed and Norslipped again: 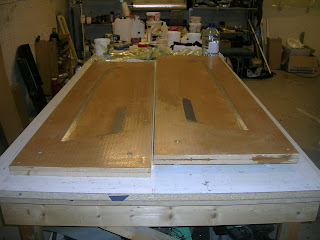 I put the two halves in, inserted the central core with carbon and epoxy wet in the process, joined the halves, bolted the moulds for alignment and put it all under vacuum: 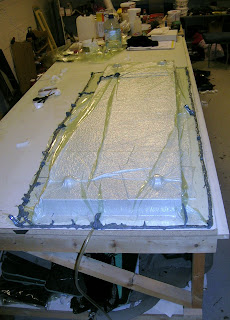 The next day I popped the most beautiful piece of carbon fibre I have ever seen out of the moulds.  Weighing 1950g, it was released from the last mould half by bending the 38mm massive MDF slightly, and as the rudder, even before an elevated temperature cure, being much stiffer than this massive mould piece, popped right out. 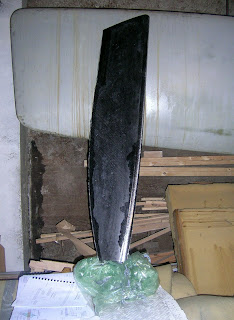 Tonight I have laminated the extra leading edge and top end strip. 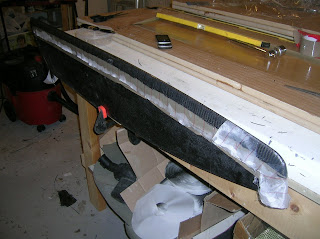 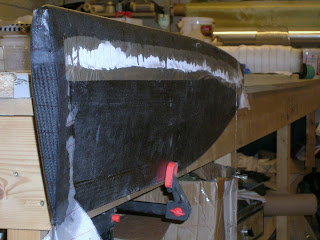 Tomorrow I'll probably go out to the coast to meet Borge and Thorleif as they have agreed to make a short stop on their C-31 north pole circumnavigation expedition to meet local multihull sailors.
Posted by Tor Rabe at 00:52

Hi Tor , these things are sent to try us ! Have never liked MDF for moulds , it is way to weak particularly when using epoxy , I think it sometimes falls to bits just under vacuum pressure and any slight adhesion of the part simply takes a big chunk out of your beautiful surface . Cheers , Jim Buckland .

Jim!
Felt really tested when I messed up the sprit and pulled apart the mould in less than one hour...
I had no problems with the daggerboard case mould, which was also from MDF and on which I made 3 parts, the first with vacuum infusion, the two others with wet lay up and bagging. The mould has a much darker colour though, and in retrospect I am sure that is because I used the very low viscosity infusion epoxy for covering the mould, and this has penetrated the MDF deeper, creating a stronger surface.

What would be your preferred material for a foil mould blank? Thanks, Tor

Hi Tor ,MDF should be fine as long as you use it to make the plugs instead of the moulds . Once you have made the fibreglass moulds off the plugs you can very quickly make a large number of rudders of very high quality using infusion . MDF is simply not strong enough for repeated use .Cheers , Jim Buckland . 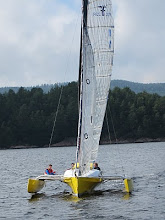 The 1991 design F-24 at speed. The F-22 will perform as well and maybe even better than this model. Click the photo for a link to the F25C

Folds easily to a beam of 2,5m for easy trailering (or full marinas). There will be basic cruising accomodations for up to four people.